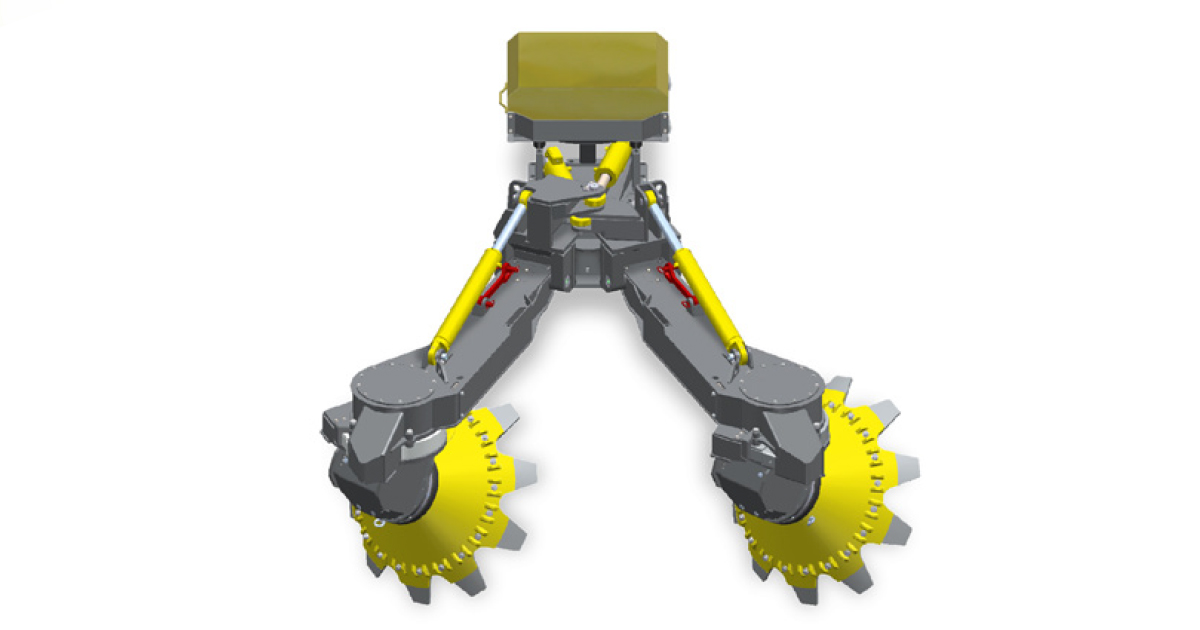 The Bracke T28.a is a robust, flexible disc trencher that can tilt its discs to lay the humus in the same direction, left or right or facing toward or away from each other. It can handle the harshest terrain conditions with a lot of rocks and slash. Scarification provides many planting beds for plants and seeds, regardless of terrain.

New discs, Bracke TD10.b
The new discs are designed to provide better scarification quality, better economy and easier replacement of worn-out parts than previous versions. The discs are symmetrical, which means they can lay humus in both directions. The new toothed plates lay more soil on the humus and allow more top-quality planting beds to be created. The bolt-on toothed plates have a long service life and are simple and safe to replace.

Design
The Bracke T28.a is designed with low traction points on its arms so that its action on the ground is even, regardless of soil variations. In case of overload, lateral arm movements are permitted and the disc can be rotated around its vertical axis. The disc motor housing is turned by hydraulic motor via a worm gear. A sensor detects motor housing position and makes sure the disc maintains its angle. Central lubrication is standard on Bracke T28.a.

Machine control
The Bracke T28.a has its own control system, which makes it easy to install on different base machines. The display makes the system very user friendly. It is easy for the operator to keep track of the trenchers functions. The sensor provides information, e.g. the base machine’s incline, disc angle and arm position. The control system can regulate disc angle automatically depending on incline, or the angle can be set manually. The Bracke T28.a has eight programmable operating profiles. The control system keeps track of the distance driven per site and in total, and the number of hours worked. The Bracke T28.a can operate continuously or intermittently.

Scarification
The new technology, which allows humus to be laid in the same direction, has many advantages, such as:

• Greater ability to run the machine in the side slopes. Results are greatly improved when both discs can lay the humus in the same direction. Furthermore, the unit takes the strain and stops the machine sliding sideways
• The risk of soil erosion is reduced by driving along the slopes instead of up them
• More even rows are also executed on level ground
• It allows for better exposure to the sun
• It creates a better visual impression